Why I Think that Conflicting Evidence Gives Us Great Opportunities 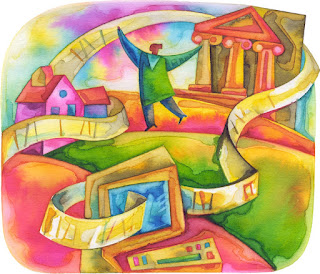 Opportunity? Some of the most interesting breakthroughs in genealogy begin with a researcher noticing conflict in evidence.

[Those allergic to travelogues may skip the next three paragraphs. I was complaining about this type of writing earlier this week. I guess I'll have to eat crow on this topic!]

When I was a newbie genealogist, I wanted straightforward facts. I wanted consistent dates and clear locations. I wanted direct evidence about family structure. Relentlessly I filled out my pedigree chart. My biggest concern was whether I named a location by its current name or by its colonial name (Milford, New Haven Colony; or Milford, New Haven Co., Connecticut?).

About eight years into my genealogy career, i.e., around 1992, I had my first chance to speak outside of local societies. I was asked to fill in for a speaker who would not make the joint Tarrytown, New York, event co-sponsored by NEHGS and NYG&B. I have no idea how my name came up on the list, but the topic at hand was the evaluation of evidence. The original presenter had been a lawyer. I knew I had not a chance in H-E-doubly-hockey sticks of truly filling his shoes.

I had to find a way to discuss evidence analysis without getting too sticky. I realized that I had a few documents in my own family files that were in conflict with other documents. I had the gall to title the 1992 speech, “Not Quite Right: Finding Errors in Sources.” I guess I knew it all back then.

[Those allergic to travelogues can resume reading here.]

In looking back, I have to admit that my approach to conflicting evidence has changed in the last two decades. I still think that a person can only be born or die once, that is, on one date in one location. A part of me continues to be determined to figure that out what is true. Over time, however, I’ve come to understand that I need to keep the complexity and ambiguity of the underlying source materials in my files, in my mind, and in my writing about them.

My chance to speak on Geneabloggers’ Radio on Friday night with Pat Richley-Erickson, Claire Brisson-Banks and Michael Hait about conflicting evidence has made me take a deeper look. Everywhere I look, I see that at its core conflicting evidence represents great research opportunity.

The link to BlogTalk Radio for Friday is Digging Deeper: Dealing with Conflicting Genealogy Evidence . The show begins at 10 pm Eastern time.

This week sees the introduction of a new book in France examining the causes of a fraud perpetrated by a woman named Misha Defonseca.[1] It may not be a coincidence that the publisher of this new book explaining (read: explaining away) Misha’s fraud is the same publisher who originally published the fraudulent story.[2] French law differs from American law. Misha’s quick admission of error and the publisher's psychological excuse for that error might possibly serve to limit legal liability in the long run. All that, though, is an issue for the courts.

The original fraud was uncovered a few years ago by Sharon Sergeant, a professional genealogist working in Massachusetts. Sharon noticed that Misha’s book about her life as a child during World War II had different versions in the U.S. and in France. What had been altered was the evidence about the family in which Misha had grown up. When the book was published in France, evidence about Misha’s origins in Belgium was removed. Sharon investigated this conflicting evidence and uncovered fraud. The presentation of the conflicting evidence caused the author to admit it was fabricated.[3]

[2] Caleb Daniloff, “A Genealogist Reveals the Painful Truth about Three Holocaust Memoirs: They’re Fiction,” Bostonia, Summer 2009 issue; http://www.bu.edu/bostonia/summer09/hoax/ , viewed 29 September 2011. Scroll down to the section titled Red Flags and Zigzags to see what evidence was in conflict.
Posted by Barbara Jean Mathews at 8:00 AM