Homer and Charry: Can We Do Better?

Today is a good day to continue our examination of online ahnentafels We looked at the cited references for Homer and Charry (Everett) Curtiss that we found online.[1]  I checked out what they supported as far as the statements of fact. We eventually found that the dates were supported except for the exact date of death for Charry. The details for these ancestors of Sarah Palin were:

Among the statements of fact, we were able to support all but one using the cited sources. That one fact lacking a source citation was the full death date of Charity. Access to printed genealogies at the Connecticut State Library did yield a source for it. That source was a printed genealogy that would be categorized as a derivative document containing secondary information (what historians would call a secondary source).[2]

Earlier, commenters reasonably pointed out that it was likely that there were better quality sources from which we could support these statements of fact. Last Tuesday I was at the Connecticut State Library in Hartford. This is a good place to look for those sources. Never one to pass up a good chance to have fun researching, I decided to see what an hour might teach me, if I spent that hour using the massive indexes in the History and Genealogy Unit of the Connecticut State Library. 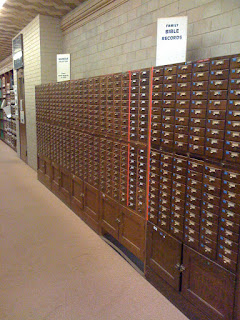 I always go to the library with a positive frame of mind. I walk in that door sure that I will crack through any walls in my way, brick or otherwise. If Homer and Charry were born in "CT" I was going to find them. I'm sure we've all run into the type of research day that humbles us and teaches us how much more there is to learn. This was one of those hours.

Homer, the son of Augustin and Lodema Curtiss, was born in Warren, Connecticut, on 20 May 1787 according to the Barbour Index, which cites Warren Vital Records 1:21.

Homer, Augustine, and Erastus, the children of Lodema, wife of Augustine Curtiss, were baptized 31 August 1800 in Warren according to the church record index, which cites Warren Church of Christ, vol. 2, page 45.

Homer Curtiss and his wife Charity were admitted as members of the Warren Church of Christ on 27 September 1818 by a letter from the Salisbury church, according to the church record index citing 2:32 and 5:74-75. They were still church  members in Warren on 11 May 1825, for which the index cites 2;39. They were dismissed as members in April 1837, and recommended by letter to any Presbyterian Church, citing 2:41a.

Charry, Betsey, Nabby Brownson, and Abner, all children of Abner Everett and his wife, were baptized on 20 July 1800 in Warren according to the church record index citing Warren Church of Christ records 2:43.

No quick-and-easy answers here. The original online ahnentafel uses published genealogy books for its citations. To be able to provide citations to original documents containing primary information (what historians would call primary sources), I can see now that I will have to develop a research plan.

That research plan will have to recognize some things unique to this corner of Connecticut. The Salisbury church is not included in the church record index. Many of the towns in the vicinity of Salisbury and Warren are fairly new towns with ancient Kent as their mother town. There is a lot of history to understand before we know where records on Homer and Charry would have been kept. No search would be complete without a look at probate and land records as well.

What will it take to make me happy with the ahnentafel entries for #122 and #123? I want source citations that are matched directly to their statements of fact rather than tacked on to the end of the entry. I want the sources cited to contain primary information whenever possible. There is a lot more to learn about Homer and Charry. More research to look forward to!