Don't Be Misled by Residential Continuity in Censuses 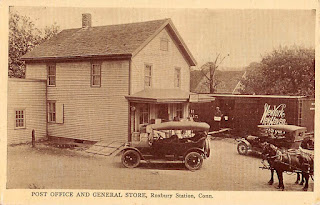 I was eager to find myself in the 1950 U.S. census. It was released at 12:00 AM on April 1, 2022. By 12:06 AM, I had found myself as a one-year-old living with my parents in an apartment over the general store. By 1950, the store had been closed for seven years. The train had stopped running four years earlier. The horse teams and wagons were gone with the Model T's and Model A's. This building was only a few doors down from the home of my paternal grandparents. It was next door to the hardware store my grandfather ran.

My father had appeared with his parents in the 1940 census in Roxbury as well. In 2032, at the release of the 1960 census, we will all still be in Roxbury. We would be the perfect example of a family firmly rooted in one town.

Except that's not true for us.

We wouldn't stay in Roxbury between 1950 and 1960 either. The following year we'd be in Wichita, Kansas, when my father worked for Beech Aircraft. Then in 1953 we'd be in Ansonia, Connecticut, when he worked for Sikorsky Helicopters. By 1957, my mother would take us children to Miami, Florida, to stay with her parents, then months later to Milford, Connecticut, as my parents worked things out. In Summer of that year we moved back together in New Milford, Connecticut, where we stayed until 1959 when Dad built our new home in Roxbury, Connecticut. This means that, by April 1960, we were back in Roxbury to be enumerated in the census once again.

We might have looked like a stable Roxbury-living family, but I went to five grammar schools before I finished fourth grade.

If you're looking at a family every ten years in the census, are they at the same home? Or are you dealing with a family like mine, that simply went to basecamp on a regular basis?

Posted by Barbara Jean Mathews at 8:55 AM